Another week, another #MakeoverMonday (MM) set of data to take a look at.

Here is .. The Data: http://www.makeovermonday.co.uk/data/

Description:
The statistic depicts the results of a survey about the estimated Christmas spending of U.S. consumers from 1999 to 2018. The most recent survey revealed that U.S. consumers expected to spend approximately 794 U.S. dollars on average on Christmas gifts.
Holiday shopping

The Christmas season or so called holiday season is the strongest sales period of the year for retailers. It usually commences on the Thanksgiving weekend with Black Friday being the leading sales and traffic day of the whole season, and continues to the end of January. Black Friday sales are closely followed by Super Saturday, which names the Saturday occurring before Christmas Eve.

Christmas is a public holiday in the United States and is celebrated on December 25th each year. It’s known as a big economic stimulus for many people to purchase Christmas gifts for their beloved family and friends. After Christmas and New Year’s Eve, retail sales usually peak again in January as many people redeem their received Christmas gift cards and vouchers. The latest holiday consumer survey revealed that almost 48 percent of U.S. consumers plan to buy gift cards or gift certificates in 2016.


During the holiday season, many retailers extend their return policy and set special shipping deadlines for guaranteed Christmas delivery in order to improve their customer-friendly service.

This is the original chart, a line chart.

As the dataset was published, it looked very simple, and assuming.
And so I thought to myself .. easy .. less than 1 hour and all in the spirit of the #MakeoverMonday!

Let’s take a look at my first visualization. A Bar Chart.

Easy. Simple. Created a focus data point that clearly stands out. That’s it? 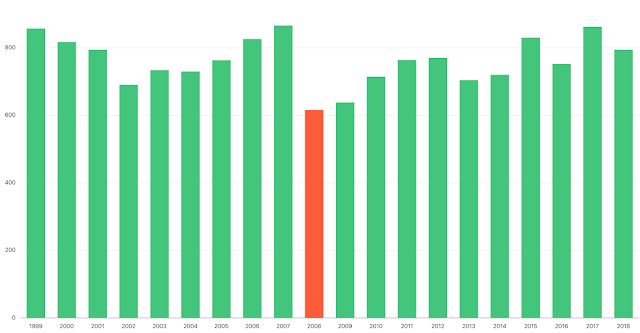 
Something was telling me that this was too easy and not all was right with this data.
I wasn’t sure what, but I was determined to find out.

With that, I turned to my friend GOOG and did a few searches to see what I could find. And what do you know, a dataset showed up, and just the one that I was looking for 😘


Good news was that I was able to match data point-by-data-point to the source data in our MM week 52 Christmas shopping in the US.

What I found in this data was different from what was given to us.

This all led me to analyze the data a bit more.

The chart that I created was an Area chart.

This was nice, but boring to say the least.


So to give the reader more context I added a few elements.

This is what I posted as my Visualization.

What do you think?