It appears that there were co-inventors: Wesley C. Sampson & Michael J. Olan

Take a look at a few of the images! Looks like a cube to me! 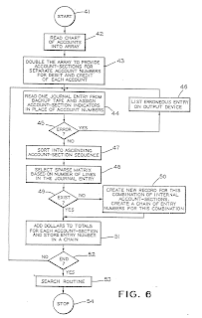 Let me clear with this post. In my mind there is a difference between who invented Essbase versus who founded/established Arbor Software Corporation.

The Arbor co-founders were Bob Earle and Jim Dorian in 1991. Their company shipped the first version of Essbase (or eSSbase) Online Analytical processing OLAP software. Their company became publicly held on the NASDAQ by 1995. In 1997, Arbor acquired Orlando, Florida-based Appsource. In 1998, Hyperion Software merged with Arbor and combined the company, and renamed it Hyperion Solutions. They sold products called Essbase, Hyperion Enterprise and Hyperion Pillar. In 1999, Hyperion acquired Sapling Corporation, and added products called Hyperion Performance Scorecard and Hyperion Business Modeling. In 2000, Hyperion introduced 2 web based packaged products, Hyperion Planning (same name as today) and Hyperion Financial Management (same as today HFM) and also partnered with WebTrends Corporation along the way. In 2002, Hyperion introduced a new product called Hyperion Business Performance Management Suite. In 2003, Hyperion acquired Brio Technology (which started with DataPivot on the Apple Macintosh.. why has “Hyperion” not given love to the Mac community yet!), Data Prism as well as The Alcar Group. In 2005, Hyperion acquired Razza Solutions (today we call it DRM). In 2006, Hyperion acquired UpStream (today we call it FDMEE). In 2007, Hyperion acquired Decisioneering (Crystal Ball). And also in 2007, Oracle announced the agreement to acquire Hyperion for $3.3B.